The Singing of Tales: The Role of Music in the Performance of Oral Epics in Turkey and Central Asia

Albert Lord entitled his book the singer of tales, not of epics. This is helpful when it comes to Turkic traditions. Much Turkic oral epic poetry conforms to the genre expectations of ‘epic’, which, as is well known, are based on the Homeric epics and the later European tradition, from Virgil to Milton and beyond. Oral works like the Kirghiz Manas or the Kazakh Qoblandı are narratives in verse, of heroic nature, of epic proportions (some versions of Manas are considerably longer than the Iliad), and also, in style and narrative structure, of ‘epic grandeur.’ But there are also other kinds of oral narrative. Some of these are heroic in nature and differ from epics like Manas or Qoblandı only by their form: they are composed in a mixture of verse and prose. Prosimetrum, as the mixture of verse and prose is termed in literary criticism, is known from many traditions. It is characterized in the Princeton Encyclopedia of Poetry and Poetics as “[a] text composed in alternating segments of prose and verse. The prosimetrum is widely attested in both Western and Eastern lit[erature]s and apparently appears worldwide. Typically, the verse portions serve as lyric, emotive, or personal insets within a philosophical or narrative frame, often with connectives between prose and verse sections …” [21] As a rule the verse portions predominate, while the prose portions serve as narrative links between them. This implies that these narratives can be viewed as epics in verse with interspersed prose (rather than prose narratives with interspersed verse). While some Turkic traditions favor verse epics, others prefer prosimetric oral narratives. Sometimes the same epic might be sung by one singer in verse only, by another in a mixture of verse and prose. To give only one example, the various Uzbek versions of the epic of Alpamish are in a mixture of verse and prose, while most Kazakh versions of the same epic are in verse; among the Karakalpaks versions both in verse and in prosimetrum are found. [22]
In addition to heroic epics there is also a different type of orally performed narrative among the traditions discussed here. These narratives are also composed in a mixture of verse and prose and their reciters are, as in the case of the heroic epic, singers of tales, sometimes the same singers who recite heroic epics. However, these narratives differ from the heroic epic in content and style: their plot centers on adventure and love, and the verse portions in these prosimetric narratives are often monologues and dialogues of the protagonists, typically lovers whose love has been thwarted by some misfortune and who express their feelings in lyrical songs. As with the heroic epics, the prose is recited, while the verse portions are sung. On account of their orientation and style, it seems appropriate to call these oral narratives ‘romances’. There is no space here for a discussion of genre; suffice it to say that the distinction between ‘epic’ and ‘romance’ which W. P. Ker (1908) has drawn with regard to medieval literature, can also be applied to these two types of oral narratives of the Turkic world, heroic epics (in verse or in a mixture of verse and prose) on the one hand and (generally prosimetric) ‘lyrical epics’ on the other. [23]
In native terminology, the tales the epic singers perform are called dāstān in many Central Asian Turkic traditions and hikâye in Turkey. Both terms are loan-words (from Persian and Arabic, respectively) and they are overgeneralized insofar as they comprise heroic songs, adventure narratives, and love tales, in other words, both ‘epic’ and ‘romance’. Other terms are also used; in Kazakh heroic epics are generally denoted by the word jır, but the terms dāstān and qissa (from Arabic) are also used and not always clearly distinguished. [24] The singers’ repertoire might comprise representatives of different genres. Not in all traditions are generic borders drawn identically; in some a singer’s repertoire might be more specialised with respect to genre (or subgenre). Prosimetric romances are found in a wide area of Eurasia: in Turkey, Azerbaijan, Turkmenistan, Uzbekistan, Karakalpakistan (a part of Uzbekistan), Kazakhstan, and in Northwestern China among the Uighurs. Not only the genre, but also specific romances are shared by all these Turkic peoples. To give an example, Ashıq Gharib and Shah-Sanam is one of these ‘lyrical epics’. It is the story of a young man, Gharib, and a young woman, Sanam, who were promised to one another when they were born, but who became separated through the evil intentions of the girl’s father. When the girl, Sanam, is about to be married to another man, Gharib, who had become a love-sick singer (âşık) appears in disguise. In most versions, he comes just in time and Sanam, who had remained faithful to him, can become his wife. The plot will sound familiar: this romance is one of the most widely disseminated representatives of the motif of the ‘Return of the Husband in Disguise’. [25] There are Turkish, Azerbaijanian, Turkmen, Crimean Tatar, Uzbek, Karakalpak, and Uighur versions of this romance. In Turkey the romance is also found as a ‘folk book’ (chap book, halk kitabı).

May Göroglı-beg come and see,
May he give his life, mama-jan,
May he give you his life!
May he live in happiness with me!
Go, mama-jan, deliver your message!

The poem is in stanzas of five or four lines. The text of this poem in other Turkmen versions, as far as they are published, is very similar to Gulum-bakhshi’s text. They are, however, all in stanzas of four lines. The five-line stanza results from a repetition of the second line; in the fourth stanza, however, a line seems to be missing (when compared to other versions). [54] The poem is composed in octosyllabic verse-lines; in singing the lines, the bakhshi frequently inserts extra syllables, some meaningless (ey), some meaningful words (yar ‘beloved’). These extra syllables are printed in italics. In addition to extra syllables in the line, there are also extra syllables between the lines and between stanzas (as shown in the musical transcription below). In some words the case ending –a (dative) is elided when an ey is added.
Like the Karakalpak baqsıs, Türkmen singers of the Tashauz (Dashoguz) tradition, to which Gulum-bakhshi belongs, play the dutar and are accompanied by a ghijjak-player. In the following notation of this song, only the voice and the dutar accompaniment is given. The ghijjak adds a further melodic line, which embroiders the dutar part and supports the voice. The transcription of words and music has been prepared by Djamilya Qurbanova and Murad Qurbanov of the Turkmen National Conservatory in Ashkhabad. 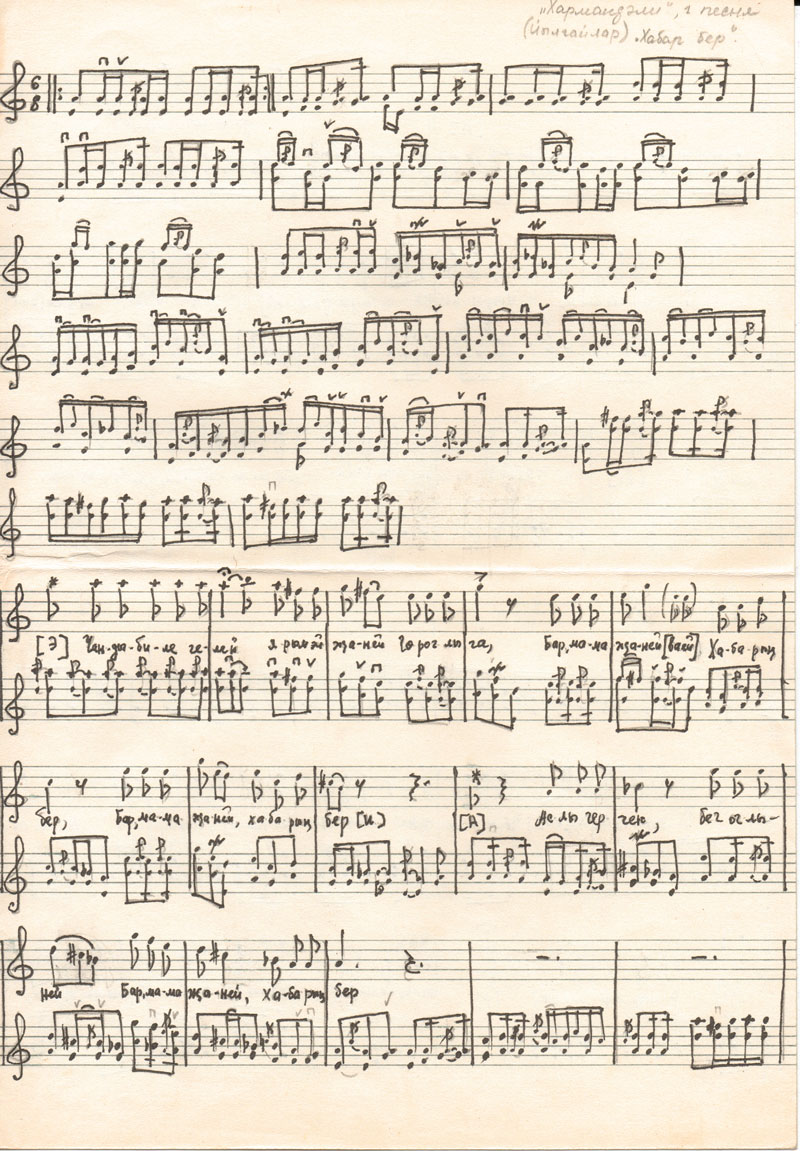 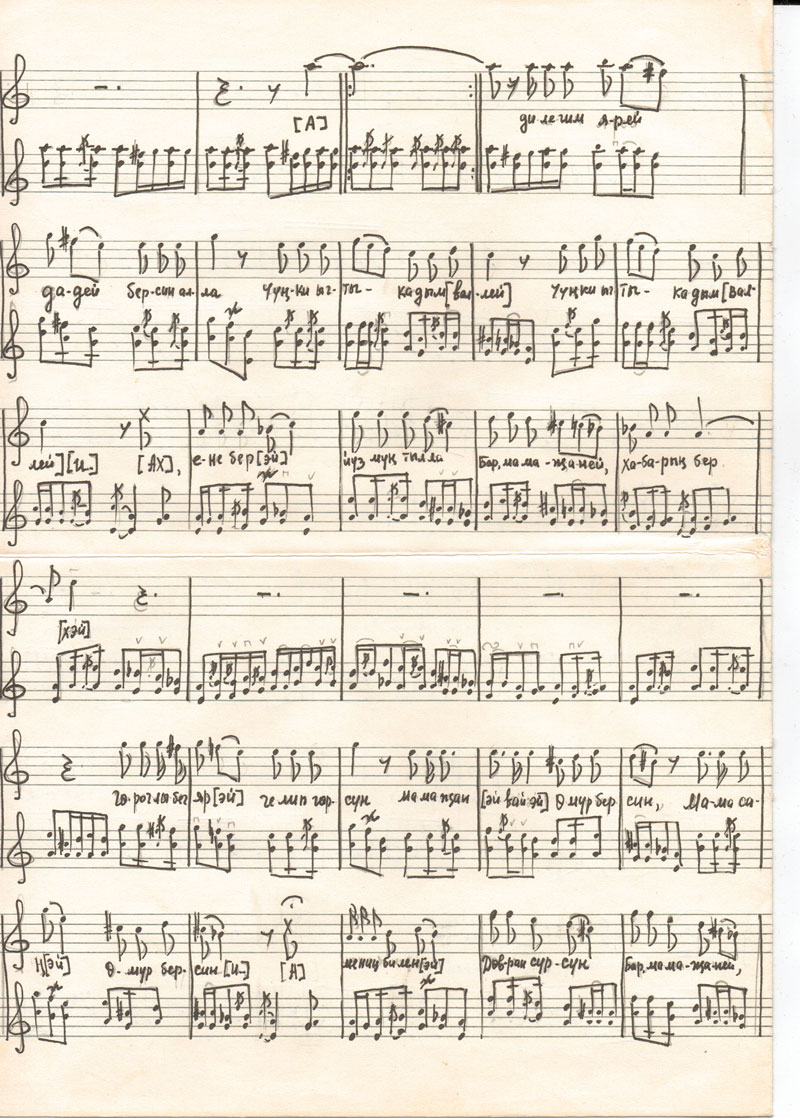 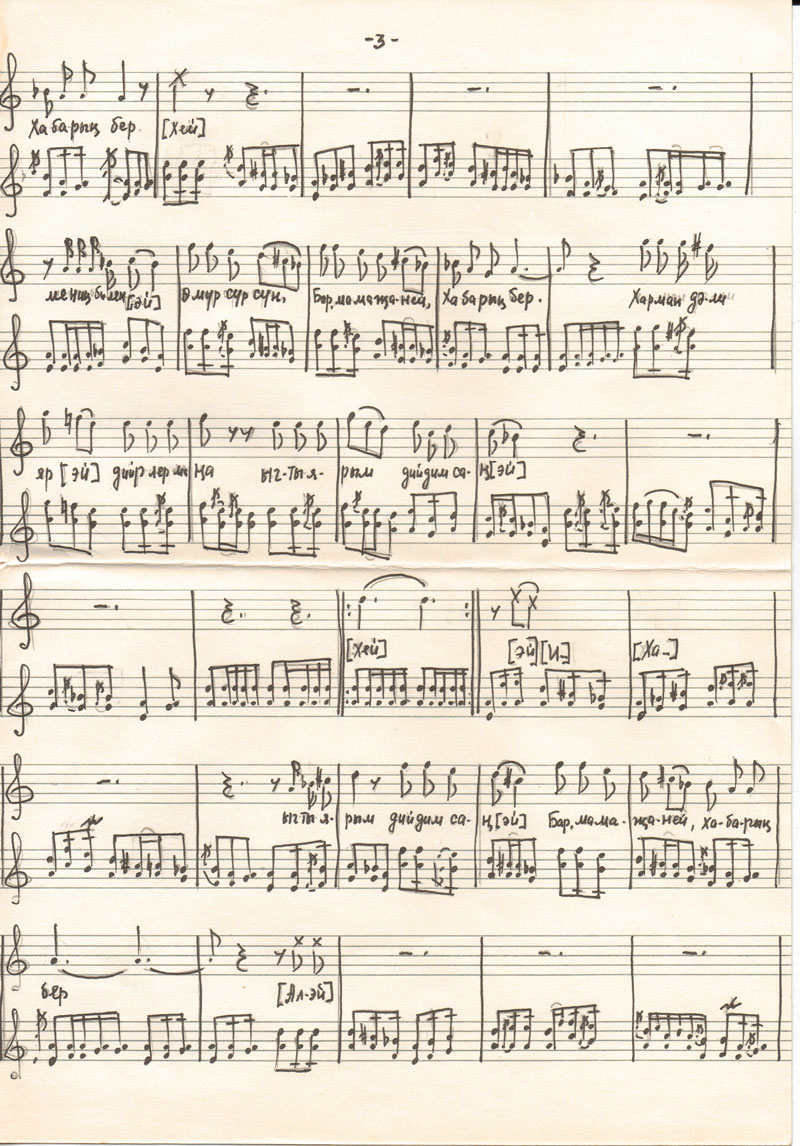 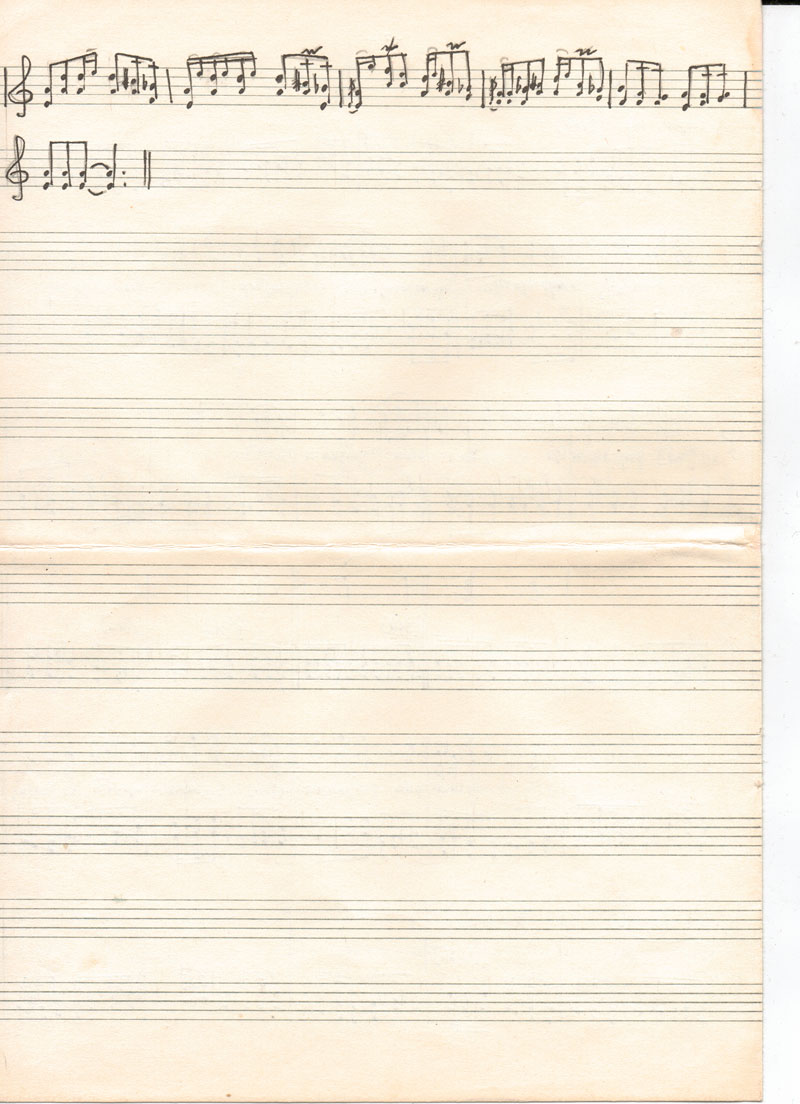