Marie Bisson and Marie-Agnès Lucas-Avenel
The rise of digital humanities has contributed greatly to the study of ancient and medieval texts by rendering accessible a large collection of downloadable and searchable texts and by digitizing many manuscript collections that preserve the memory of these texts. Nevertheless, very few researchers today make native digital editions from ancient sources. However, the use of digital technology makes it possible to overcome certain constraints of a printed critical edition (for example the access to the facsimiles and/or different reconstructions of the manuscripts) that are due to both economic and material reasons. Thanks to the new data storage space and the new methods of consultation, the scientific apparatus can be considerably enriched and reading practices can be thought of differently. Consequently, the digital revolution for the humanities – in particular for the sciences of erudition – have been accompanied by a reflection on the best tools to use and the influence that the use of these tools could have on research. [1] This reflection has reached the point of becoming part of research itself in an approach that is both methodological and theoretical, following an empirical and heuristic progression. Several multidisciplinary programs conducted through a partnership between the CRAHAM [2] and the Pôle Document numérique [3] (PDN) have been conceived to encode and edit ancient and medieval sources, in order to ensure a multimodal edition at the Presses universitaires de Caen (PUC). In this paper, we present the theoretical principles applied on the critical edition of Gaufredus Malaterra’s work, which led to the creation of a plug-in [4] for XML Mind XML Editor [5] and more generally to a digital research environment for the editor of the critical edition.

The PDN and the CRAHAM have carried out various programs for digital editions of Latin sources that testify to the complementarity of both types of digital editions: documentary and critical editions. [6] The aim is to provide a critical text, edited according to the neo-Lachmannian method, accompanied by its critical apparatus. [7] The edition is also enriched by representations of the documents in the form of facsimiles and scientifically annotated reconstructions enabling the reading and the understanding of the documents. In this way, the critical text and its critical apparatus become reference tools from which the reader can browse through all the documentary states of the text.
In addition to theoretical questions debated in particular by followers of old and new philology, this type of publishing also raises practical issues:
In order to face these difficulties, the PDN and the CRAHAM, in partnership with the national programs mentioned above, have combined their skills and designed an open source digital working environment. It allows all the data concerning the Latin text, witnesses, French translation, indexes, and different types of notes (philological, sources, commentary) to be described and encoded in TEI P5 in the best possible conditions, then analysed, and finally rendered in an ergonomic manner in partnership with the PUC. An example of the work realised with this partnership is the multimodal edition of Geoffroi Malaterra, Histoire du Grand Comte Roger et de son frère Robert Guiscard. A first volume was published in 2016, with a website accessible in open access. [10] The second volume is currently in preparation, and the website that contains the data of both volumes is still in restricted access. [11]

2. Brief presentation of the critical edition of Malaterra: history of the text

Malaterra wrote his opus around 1100 in response to Roger of Altavilla’s command. It is the account of the conquest of southern Italy by Tancred of Altavilla’s sons from the 1030s through 1098, when Roger received the so-called “Apostolic legation” from Pope Urban II. The work has been transmitted to us by four primary manuscripts which belong to two families: α (A, C) and β (Z, B). Manuscript A is very mutilated, but we have two indirect witnesses before the loss of the folios: the edition of Caruso (Ca) and the copy of the editio princeps preserved in the university library of Messina (Me), which presents marginal notes made by a reader of A from the eighteenth century. For a better understanding of Malaterra’s work and its witnesses used to build the environment, please refer to the stemma on the poster and read the “Introduction” in the first volume mentioned above. [12]
One of the essential inputs of the research was to offer a new critical text, established with the rules that G. Resta defined in 1964 after the discovery of manuscript Z in the library of Catalunya. In order to give an exhaustive critical apparatus and philologic notes, we decided to use the critical apparatus module of the TEI. As the encoding work has progressed, our thinking on the tools has evolved, and the very purpose of the use of the tools by researchers has changed.

The initial objectives were reader-centred objectives (blue part on the poster). The dual-media publishing project – print and web – was originally conceived for the many benefits it offered to readers of the publication:
These post-publication advantages are already considerable for the publisher, readers, and scholars. However, they may not be convincing enough for scholars interested in making other critical editions if the encoding work is too time-consuming and unsuitable for their own research.
This is why we extended our objectives to improve the tools for the ecdotic phase of the work (red part on the poster): with a new XML-TEI environment, it is now more convenient, secure, and fast to encode and compare the data, and then to establish the text and write the critical apparatus.
Thus, the PDN designed a new plug-in, with TEI-P5, and used the critical apparatus module according to the parallel segmentation method. The using of this new plug-in has a threefold target:
The text composed by Gaufredus Malaterra offered a large number of problems that are common to all critical editing work of a Latin source. The researcher who is interested in this work can freely download the XML files and the documentation that specifies the schema and methodology to carry out critical source editions in XML-TEI. [13]
Thanks to close cooperation, the discourse between the CRAHAM and the PDN has led to the creation of an environment dedicated to the publication of a digital critical edition that gives free access to the text and different representations of the documents and is enriched by a complex set of notes. The first part of our job was focused on the reader, the receiver of the edition. The second part focuses on the editor. Actually, the reader can reproduce the digital working environment of the editor since the reader can download the files, application, plug-in, and documentation on their own computer. Provided that the ecdotic specialist agrees to familiarize themselves with the tools, this environment will be able to produce another critical edition work in a safe, perennial, and interoperable way, being adaptable to the specificities of the text and the witness documents.
At present we are preparing the English translation of the manual and the environment, and we are examining the possibility of aligning our TEI schema with the one proposed in the guidelines for the digital Library of Latin texts. [14] 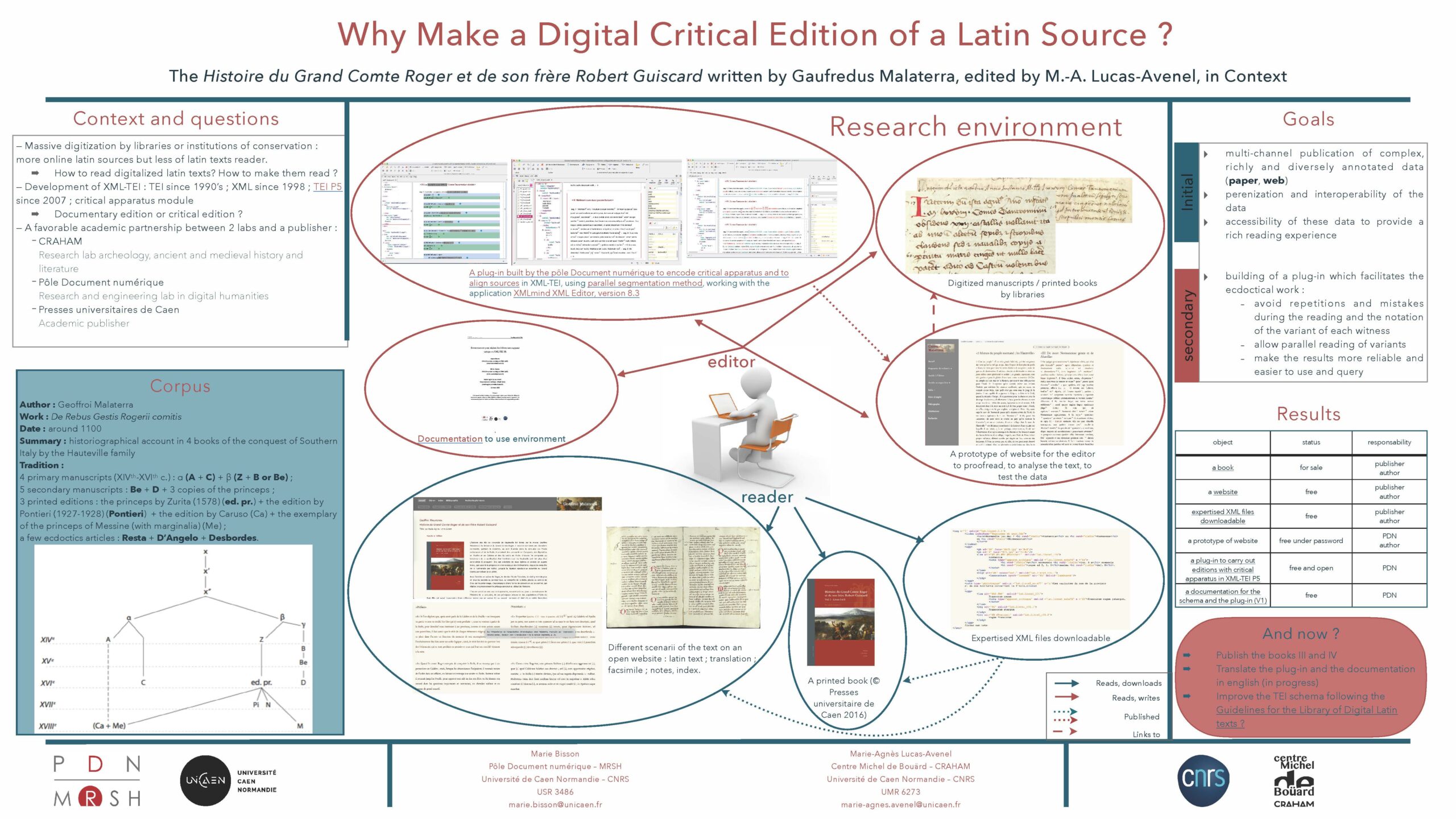 [ back ] 1. In France, numerous research programs in digital humanities have been developed, grouped into various labelled consortia (CAHIER, MASA, COSME) within Huma-Num (https://www.huma-num.fr/) or “Equipements d’excellence” (Equipex), such as Biblissima (https://biblissima.fr/). These new research practices, based on national and international collaborations, make it possible to strengthen reflection on the use of tools and standards or on data access rights and guarantee the implementation of common methodologies for data sharing. This reflection is based in particular on that carried out by the international consortium “TEI” and the tools developed by this consortium, as well as by Dariah, a European infrastructure of which the TGIR Huma-Num is a member.
[ back ] 2. https://www.craham.cnrs.fr.
[ back ] 3. http://www.unicaen.fr/recherche/mrsh/document_numerique.
[ back ] 4. This plug-in is designed for encoding the data – and especially critical apparatus – in XML-TEI.
[ back ] 5. XML Editor developed by Pixware company: http://www.xmlmind.com/xmleditor/.
[ back ] 6. For a presentation of what are called “documentary digital edition” and “critical digital edition” and the debate about what should be done, see Duval 2017 and Régnier 2017:95–96.
The research aims to establish the text and its critical apparatus; the text is established by comparing witnesses and applying the scientific principles that emerge from the study and collation of the witnesses. This is done by following the recommendations of André 1972 and Bourgain and Vielliard 2002.
[ back ] 8. Pierazzo 2014:1–23.
[ back ] 9. Andrews 2013:61–76.
[ back ] 10. Lucas-Avenel 2016.
[ back ] 11. The work for the elaboration of the multimodal critical edition of books 3 and 4 was the subject of the unpublished HDR supported on June 12, 2019, at the University of Caen Normandy, in front of the jury composed of P. Bauduin (president), E. D’Angelo, I. Draelants (recorder), B. Gauvin, C. Jacquemard (garantor), A. Peters-Custot (recorder), F. Ploton-Nicollet (recorder), and E. van Houts.
[ back ] 12. Lucas-Avenel 2016:89–104.
[ back ] 13. http://www.unicaen.fr/recherche/mrsh/document_numerique/outils/apparat.
[ back ] 14. https://digitallatin.github.io/guidelines/LDLT-Guidelines.html.