About the Kyklos Logo 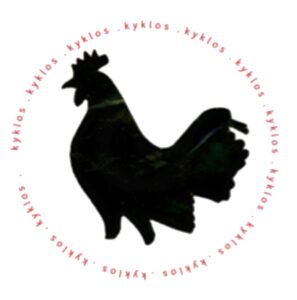 Our rooster logo is taken from a shield in the museum of ancient Olympia, where the idea of the Greek Epic Cycle project was first conceived and discussed during a warm summer day in 2008. So, first, the rooster is a link to the birthplace of the idea. A second, and very important, implication in the choice of the rooster relates to a basic principle of the project: an ever-regenerated discourse on the Greek Kyklos; and this is how it connects with the concept of re-generated logos. Gregory Nagy, in his opening address to the Athens Dialogues Conference that inaugurated the Cultural Center of the Onassis Foundation in Athens in 2010, singled out some platonic passages that refer to the idea of the undying logos. The last passage comes from Plato’s Phaedo, when Socrates, having drunk the koneion, gives his last instructions to the friends gathered by his side during the last hours of his life. His very last instruction is to sacrifice a rooster to Asklepios, the god of healing:  ὃ δὴ τελευ- / ταῖον ἐφθέγξατο – Ὦ Κρίτων, ἔφη, τῷ Ἀσκληπιῷ ὀφείλομεν / ἀλεκτρυόνα· ἀλλὰ ἀπόδοτε καὶ μὴ ἀμελήσητε (118.a.6-8). Nagy’s interpretation of the passage is that “if you sacrifice a rooster the night before, you wake up to the sound of another rooster.” So, the sound of the rooster is associated with revival, pointing to the regeneration of the logos that transcends the death of Socrates himself, the master of the Platonic dialogues. This never-dying logos is what we aim for with the Kyklos.

The artwork transcribing the emblem on the shield to our current logo is courtesy of Aspasia Balta, a young Greek student of Architecture at the Polytechnic School of Athens.