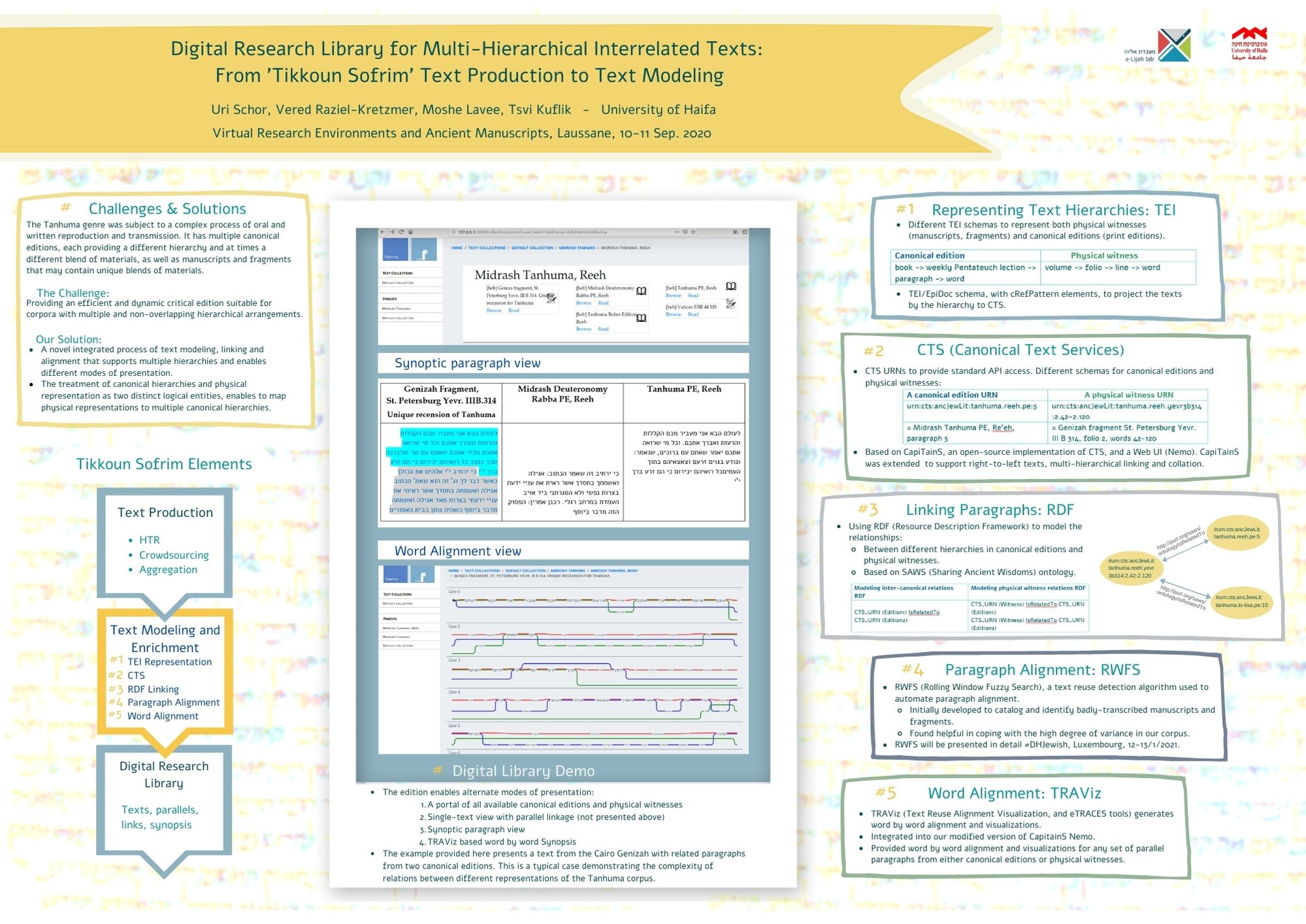 “Tanhuma / Yelamdenu Literature” is a vast literary corpus of rabbinic homilies to the Hebrew Bible. It is a diverse group of interrelated texts, evolved through a long process of fluid and unstable oral and written transmission. Different recensions are available in a variety of print editions, dozens of manuscripts, hundreds of fragments, and secondary citations in medieval anthologies (Bregman 2013). There is no single accepted canonical hierarchy, i.e. internal structure by which the text is sub-divided (such as sedarim, chapters, and paragraphs), representing all text variants. Various print editions provide different hierarchies and content, and the evidence of manuscripts and fragments further complicates the picture (Urbach 1966). Accordingly, the print medium provides insufficient access and inadequate representation of the corpus in its full entirety and complexity. A virtual research environment (VRE) for the Tanhuma is expected to provide a dynamic collection of homilies drawn from within the entire corpus and reflecting the complex interrelations between editions, manuscripts, and fragments.
The Tikkoun-Sofrim project was conceived for transcribing Tanhuma manuscripts by combining handwritten text recognition (HTR) and crowdsourcing (Wecker at al. 2019 and 2020). Following this project, we proposed a data modeling framework and an integrative process for inclusion of the transcriptions in a future VRE. We build upon recent perceptions that a VRE may provide “texts in versions and texts as versions in a way that is much simpler, more intuitive and dynamic than corresponding print attempts” (Pierazzo 2016:50). This new theoretical model inspects more granular pieces of texts in manuscripts, aiming to detect variations and mutations between these fragments (Pierazzo 2016) and representing the complex organization of these variations in a graph data structure (Andrews and Macé 2013). Based on hypergraphs representing the multiple relations between pairs of homilies or sections it is possible to cope with the Tanhuma corpus, for which it is impossible to model textual transmission lines as directed acyclic graphs (stemmata). “The pervasive linkage between different contents and parts promote a modularised structure and a module-oriented vision of scholarly editions” (Sahle 2016:29), supporting the high degree of modularity of the Tanhuma corpus.

The model for the digital library was inspired by the Sharing Ancient Wisdoms (SAWS) project [2], in which a digital library for gnomological corpus was designed and implemented. The gnomological, wisdom-saying texts are abundant with interrelations, such as translations, allusions, and paraphrases. The SAWS library was composed by the texts in the gnomological collections, each divided into short paragraphs of atomic wise-sayings. These paragraphs were made accessible by the canonical text services (CTS) API, so that each paragraph is citable by a unique ID, a CTS URN. The links between such sayings were modeled by a resource description framework (RDF), thus creating a graph, in which the edges are paragraphs, and the vertices are the links between paragraphs. Different types of links were denoted by an RDF ontology, e.g. isTranslationOf, isParallelTo, isShorterVersionOf, etc.

While the approach of the SAWS project demonstrates an effective way to model links within a set of paragraphs, the problem we faced was the modeling of the links between paragraphs and subparagraphs in canonical hierarchies (print editions) and physical witnesses (manuscripts and fragments). The two constraints were:

With the limitation of a single hierarchy per text imposed by the CTS standard, we have decided to use two different hierarchy schemas, one for canonical edition texts, and one for transcribed physical witnesses. The canonical texts were organized by the traditional structural hierarchy of the print editions, while the transcriptions were organized by the physical layout of the manuscripts. In each of the cases, the CTS hierarchy goes down to the word level, allowing for citing, and therefore linking, arbitrary text ranges, bound by two words. Using RDF, we have documented the links within the library of citable texts. Together with a Web UI, we provide the researcher with a bird’s-eye view of a complex web of inter-related texts, along with the ability to zoom-in to close-reading of related texts. With the abundance of canonical editions containing Tanhuma genre texts, and the growing availability of manuscripts transcriptions—the artifacts of the Tikkoun Sofrim project—a comprehensive digital library can be built in the coming years.
In the current poster we present a basic, preliminary application of our model, the representation of relations between physical witnesses and canonical hierarchies. Specifically, the poster shows a fragment from the Cairo Genizah, containing a homily for Deuteronomy. This fragment is the only available witness to contain together materials that are found separately in two print editions. However, the model we suggest is flexible enough to support many other complexities, as we shall present below, after describing the process and the current demo edition.

We offer an integrated process of text modeling, linking, and alignment that supports multiple hierarchies and enables different modes of presentation, based on the integration of various available tools and standards as well as their modification to fit the unique challenges typical to the chosen literary corpus. A practical/ideological decision was made, to use only open-source software to build the solution, so that it can be reused and enhanced by others.

This work enabled the creation of a basic demo edition for the Tanhuma Corpus. We included in the library manually transcribed texts for a single Pentateuch lection—Re’eh. CapiTainS was used as the CTS server, and its Web UI—Nemo—was used to provide browser-based interface to the library. With the help of its tutorial and documentation, we have configured and extended CapiTainS Nemo to support right-to-left texts, the annotation linked paragraphs, and zooming into linked paragraphs. The VRE provides:

The ability to refer to any text range using CTS, combined with annotation with RDF, enables the tackling of many other challenges by offering additional elements for representation and documentation of various relations, for example:

At the core of our model is the use of a library containing texts in multiple hierarchies, both diverse canonical hierarchies from print editions and hierarchies of physical witnesses of the corpus. The model enables the representation of all the links between the texts. The use of RDF will enable marking and storing more complex interrelations between the texts. The model is based on common standards and open-source tools and hence may serve for the tailoring of applications for other corpora with similar characteristics.