Slaughter at the Altar: The Career of Neoptolemus at Troy in the Epic Cycle and Beyond

As the scene moves inexorably toward the death of Priam, Virgil first brings attention to the violation of the familial realm, with a father forced to view the death of his own son. This act alone is heinous enough, and, according to Nagy, represented in antiquity as a type of figurative blinding. [12] Indeed, according to Priam, these violations are sufficient to bring about the condemnation of the gods.

Some have seen the internal conflict within Neoptolemus as evidence of an ephebic coming-of-age rite where young men are initially put through tests that require guile and deception, [22] but this analysis fails to capture the psychological complexity inherent in Neoptolemus’ actions throughout the play. When Neoptolemus acquiesces to the plan of Odysseus only to reverse course when faced with the pleas of the suffering Philoctetes, Sophocles shows us what can happen when the young man’s inherited qualities, both real and perceived, come into conflict with the actual “dilemmas of life.” [23]

This movement from antagonism to reconciliation is also present in the triadic structure of the paean itself, which conforms to a symbolic agon between the three parties represented in the poem: the poetic voice, the Delphians, and the Aeginitans, who have arrived to celebrate the Theoxenia, a ritual enactment of a divine banquet. It can be said that the many “prerogatives” (µυριᾶν περὶ τιµᾶν, 116) Neoptolemus was pursuing at Delphi in the mythic paradigm are an allusion to any contemporary outside parties that the Delphians perceive could be seeking to challenge their position, such as the Aeginitans or even the poet himself. [38] Thus, by bolstering the role of Neoptolemus and making him an even more worthy adversary—the stout hero is solely responsible for the sack of Troy according to Pindar’s paean (103-104)—the Delphian chorus both burnishes the status of their patron god, Apollo, and pays respect the flourishing hero cult of Neoptolemus. As opposed to the mythic paradigm of the second triad, where the Delphians trumpet a retributive Apollo, the third triad, where the Aeginitans are represented, strikes a conciliatory tone. Thus, the paean embraces and re-enacts a tension that could be experienced when a work is commissioned by an outside entity, such as the Aeginitans, to be performed in the context of the Panhellenic sanctuary at Delphi. Of course, the peripatetic poet Pindar, who had a relationship with both the Aeginitans and Delphians, is not unlike Polygnotus, who, in addition to working on the Cnidian Lesche at Delphi, painted an Ilioupersis for the Stoa Poikile at Athens.
If we compare the versions of the death of Priam encapsulated in the painting of Polygnotus and the paean of Pindar—two works that overlap temporally and geographically—at first glance a wide thematic gulf can be discerned between the two. In the painting, Priam has been dragged away from the altar and lies dead, an effect that, in comparison to previous iconographic images, lessens the charge of corrupted sacrifice. Although Pindar, in a way, keeps the altar as the location of Priam’s death, he also lessens the potential charges against Neoptolemus. His Priam is not a feeble old man with an arm outstretched in supplication; instead, he vigorously leaps toward the altar in a final act of self-preservation. With Pindar, there is even ambiguity in the actual position of Priam at the time of his death. We know he is leaping (ἐ[πεν]θορόντα, 114) [39] for the refuge of the altar, but did he reach it? Although his actions were evidently enough to precipitate the retribution of Apollo, Pindar leaves some room for doubt, as the scene straddles the line between the two epic traditions.
Thus, the geographic location of Delphi, the Panhellenic sanctuary of Apollo where Neoptolemus also had a hero cult, has exerted a strong influence in both the visual and literary representation of the death of Priam. In choosing the sack of Troy as their theme, the artists Pindar and Polygnotus have given their clients a theme that is multivalent and encapsulates a tension that is appropriate to the Panhellenic sanctuary of Apollo. Ultimately, if they chose to temper the sacrilege of Neoptolemus, their focus and subtle manipulation of theme can be said to be predicated by local concerns more so than by the political situation confronting Greece during that era. While the ongoing tension between the Greeks and Persians at this time could very well have been a factor in the choice of the macro-theme of the Ilioupersis at Delphi, I have argued that the intended effect of this choice should be considered in conjunction with the peculiarities of the site and the parties primarily associated with those specific works. Indeed, the thematic development of the poems from the Epic Cycle were undoubtably shaped by similar local concerns, though there was little consensus in antiquity on the actual geographic origin of the epics. [40]
By keeping a narrow focus on the death scene of Priam, I have attempted to show that elements from both Cyclic epics concerning the fall of Troy were kept alive in subsequent works. From the very beginning, artists fused, contrasted and juxtaposed themes that were present in both the Iliou Persis and the Little Iliad. The fact that Proclus did not include a summary of the Little Iliad’s rendition of the sack of Troy would make it seem that the Iliou Persis enjoyed canonical status in later antiquity, a perception that continues to the present day. The striking visual image of Priam at the altar certainly had an iconographic and thematic allure that was only bolstered by the inclusion of the Astyanax detail from the Little Iliad. When later works fused together important details from these early epics, this process tended to mask the fact that the poems from the Epic Cycle could have certainly pursued different thematic agenda. If not for Pausanias’ description of the Cnidian Lesche, the alternate tradition of the Little Iliad may have been lost to us, but its presence would have continued to lurk even under the surface of works that outwardly look much more like the Iliou Persis. 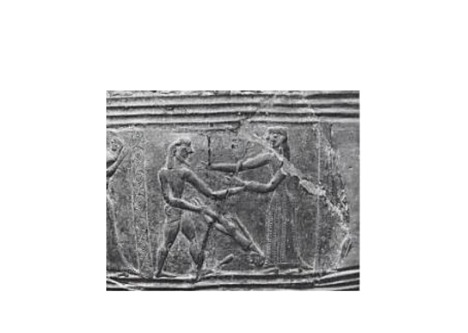 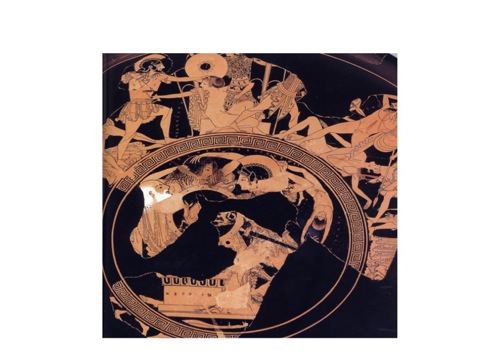